In a place somewhere between virtual and actual, through the collision of meanings and anti-meanings, these visionary fever dreams explore the possibilities for artistic resistance to the corporatisation of forms of life, both animal and human.They take the form of a loosely inter-related series, colliding a number of genres: science fiction, mock-documentary, absurdist satire and video art.

Two bizarrely costumed characters – a human ‘chicken’ in a fat suit, and an elaborate folksy creature called an ‘authenticity fetish’- meet and debate their plight. In an attempt to reconcile themselves with some unspecified trauma of mass biotechnoviolation, these two beings quiz one another in rhyme and animation on the origins and ontologies of their species.

A man and woman speak urgently to camera about their relationship with an intelligent substance they call ‘Animal Expanded’. The man has swallowed Animal Condensed; as it expands it flows throughout his home, improving his family. He holds his five-year-old daughter up to camera: “Look how her fibres are formatting! She is her very own accelerated portfolio.” The woman has refused to swallow it – as ‘it’s not alive in the right way’. For this disobedience she is tracked by Deep Face and punished with Confusion Events. But in her studio she is building new weapons, bizarre kinetic sculptures with skewed faces and stark black and white camouflage stripes that she believes will ‘Re-align the narrative centre’. This struggle between conformity and dissent quickly escalates into exceedingly strange domestic science-fiction involving many pigs.

IT ONCE HAD A FACE, NOW IT WANTS ONE AGAIN

Two billion years from now, the oceans are beyond understanding, yet undersea karaoke may still be possible. The ghost of an oyster holds memories of what happened. It sings to a scrap of cloth that fell to the bottom of the sea, trying to get a face. An installation of objects and video in which cloth and string, song and dance, costumes and goo collaborate to find new ways of moving in bleak time.

The videos in this series are presented in tightly designed, visually co-ordinated environments. Some of them also function as standalone single screen video works and/or as hybrid video-performances.

Part three is in progress, and has been commissioned by the Whitstable Biennale to be presented in 2021. For more info, watch this space.

Below are some reviews of the work and installation images.

“Thomas’s critical skill lies in how her fables – fashioned, stream-of-consciousness-style, out of the detritus of pop-cultural neologism- tie everyday experience, through their use of the bizarre, to far bigger political and philosophical questions.”

“Our food, just like our politics, is synthetic. A supermarket chicken looks like an animal but doesn’t taste like one. Animal expanded. Everything in Jennet Thomas’s work is abstracted, condensed and expanded. Dissonance abounds, Bridget Riley crossed with Doctor Who, the high and the low, the optical and anecdotal – biological and technological. I’m reminded of the recent advert on the underground about how they can ‘delete’ blood cancer — your body as hardware, drugs as software — your body enhanced, expanded and abstracted.” 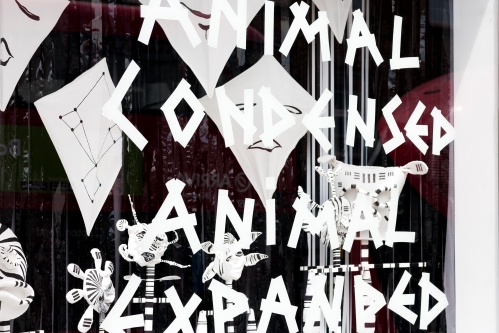 More info about the Xero, Klein and Coma show HERE